“I am made up of everything I have seen”. Framed near the door of the Derek Eller Gallery, Henri Matisse’s quote could have been the title of the current exhibition by Nancy Shaver. Her omnivorous eye has amassed a world of objects that run the gamut from seriously high to screamingly low, with which she has conjured a mad-cap high-spirited and ultimately radical mash-up flowing throughout the gallery space. Shaver’s new work, sculptures, paintings, drawings by other artists, and a volcanic eruption of what one might call “collectibles” – odd tchotchkes, singular pieces of vintage furniture, the flotsam and jetsam with which we affectionately and obsessively populate our living spaces and stuff our closets, attics, and basements – join hands, confabulate, and generally litter the gallery in merry, extravagant profusion. 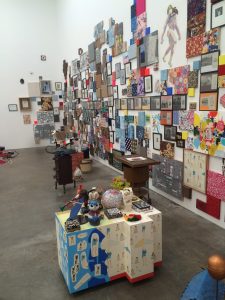 Shaver has been working in a kind of off-kilter funky formalism for years, consistently nodding to geometric structure while subverting it with the counterpoint of pattern, asymmetry, and humble found materials. Her reach has been ever expanding to incorporate objects pulled from the territory of craft and utility. Since her headlong plunge into the antique business with the opening of her idiosyncratic shop Henry in Hudson, NY, her predilection for sculptural shape and form found in the odd tool, utensil, toy, or whimsical vintage furniture piece has exploded into an uncanny agility at folding the detritus from life’s wellspring of objects into her art.

What feels fresh in this recent show, titled Dress the Form, is a rarely seen combination of generosity and humility: Shaver’s voice speaks not in the key of “I the artist”, but of “we the makers”, for she has orchestrated the installation (and the whole gallery space can be viewed as one delirious “cabinet of curiosities”) by combining her own discreet works with the works of artist friends, collected objects, and all manner of made visual phenomena in a way that breaks down the time-honored solo voice of the artist, and moves towards a more choral voice in concert with other makers, almost tilting towards the more collective attribution of “anonymous”. While her clear authorial sensibility keeps a firm albeit laid-back rein on the operatic ensemble, she has invited many other players to join in the performance. As she says tellingly in a wall panel adjacent to the monumental wall installation: “From Henry [her antique shop] I have learned how to use massive amounts of color, shape, and texture, as well as how to make the singular reveal itself amid a quantity of disparate objects. Teaching at the Bard MFA for the last almost 20 years has made me value a vast range of art and shown me the generosity of art making for maker and viewer.” 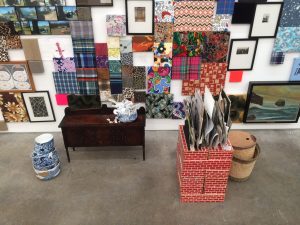 There is a subtle method to her madness. The exhibition begins quietly with a Shaver sculptural piece entitled “A Combination” greeting visitors at the door – a humble duet of objects squatting on the floor, the color-soaked combo playfully referencing stool and rug and collapsing the binary notions of art and utility. The playfully impractical footstool-like structure, too small and too low to sit on, hovers between furniture and sculpture; the industrially manufactured rug is bunched up in a colorful heap to defy its function. OK, we’re going to be tested here: to what aesthetic category does this belong – craft, design, furniture, art? Proceeding down a long narrow passage that leads to the main gallery space, the viewer first encounters framed photos of Matisse and Duchamp paired with a few pithy epigrammatic quotes, among them the one cited above, and this snatch from Duchamp: “ ..that’s the trouble, taste can’t help you understand what art can be”, and which form a kind of ars poetica for Shaver and set a tone that informs the entire exhibition.

Next up down the hallway is an ensemble of several artists’ works including Shaver’s, wall-mounted on a backdrop of serialized prints by Dawn Cerny laid out in rows of multiples to mimic wallpaper. On closer inspection, the prints are partially silkscreen, partially hand painted, depicting an ordinary scene of people relaxing at the beach. The very quotidian nature of the scene, in each iteration both the same and slightly different, lends a humanistic valence to the show, which while almost totally lacking in figurative images, nonetheless speaks directly to human experience – the lived life. This underpinning is brought home by the two oval frames mounted on the “wallpaper”, suggesting a pair of traditional portraits of ancestors, the original owners of this “house”. But instead of portraits, Shaver has stuffed each frame with a bunched article of worn clothing, as if to say we are what we use, thereby echoing in spirit the Matisse maxim that introduces the show: “I am made up of everything I have seen”.

As the passageway gives way to the large back space of the gallery, the visual crescendo builds dramatically, hitting you full force with an optical overload of objects jostling each other in startling combinations, alternately lying on the floor, clustered close together, piled on top of each other. And providing a kind of narrative trajectory to it all, the escalation of sheer volume culminates in a massive wall installation flowing like lava up and across the far long wall. Like an orchestra tuning up, every instrument sounds its note at once, bleating and squeaking and tooting in a seemingly undifferentiated wall of visual noise. It’s a bit overwhelming, but then, it looks like fun! Like a party you enter where you don’t know anyone, you begin to look around to get your bearings. At this point, at least one thing is clear: a number of traditionally opposed forces have crossed the artistic Maginot line, and are fraternizing with abandon – high art with decoration, aesthetics with utility, the individual with the tribal collective, the past with the present, the solo object with the group – all in an overriding ludic spirit of improvisation. Don’t look for irony here; the tone is overridingly one of affection, humor, pleasure, and plain astonishment at how weirdly original we can get.

Picking up the thread from where you first entered the main gallery space, you encounter discreet Shaver sculptural pieces but set so close to each other, it’s unclear how to view them – are they to be considered as a group, or as separate works? This question persists throughout the room, and it’s part of the festive vibe of the show. It’s all very relaxed (though, of course, carefully staged to be so) – every work is talking to every other in a companionable way. The viewer /can do the same – consider works individually or as part of a larger whole – it’s a big friendly shindig. There are some gorgeous pieces in the crowd too: one standout is a stunning Shaver sculptural tondo on the wall, held in a found circle of corrugated rusted metal, bulging with bunched patterned fabric and bits of bric-a-brac, delivering all the juicy formal aesthetic satisfaction of a Braque but with more aggressive tactility and less “good” taste.

Turning clockwise towards the gallery’s grand finale, the mash-up becomes more intoxicating (what drug are we on!?), the works even closer together, color more jazzed. There’s a fetching collaborative duet on the floor – several stool-like sculptures (a recurring trope), low and goofy again, placed on a rug made by Emi Winter – the ensemble’s color hits delicious notes. Then all hell breaks loose – more voices of other artists pile on, and the far wall erupts in a riotous oceanic chorus of syncopated two-dimensional works, unattributed as to authorship (unless you refer to the gallery image list of nearly novelistic length), deliriously seeming to teem and grow before your eyes. Shaver’s clusters of stretched patterned fabric rectangles rub shoulders with artists’ works of all persuasions – beautifully painted watercolor still lifes of Shaver’s fabric blocks by Adriana Farmigia (quoting Shaver within a Shaver!), lively paintings by Tracey Miller, meditative pattern drawings by Mark Wonsidler, funky ceramics of Joyce Robbins – to name only a few. The pulsing accumulation is punctuated with small fluorescent fabric canvases (Shaver’s again, that she calls “spacers”) that help keep the eye moving over the heaving display. Then the whole 2D sing-along pops into three dimensions on the floor in front, as kooky artifacts – some of them “laugh out loud” funny, run riot, like the tipped over plastic dinosaur laying on top of an oddball cabinet on castors, as if knocked over by someone who left in a rush. Another unhinged constellation of outrageous objects features an irregularly shaped pedestal, its side surfaces covered with more Dawn Cerny prints and Nancy Shaver patterning, its top presenting a zoo of small objects as from some eccentric’s attic including a red feathered rooster figurine, a cement bunny, plastic flowers, a small sculpture made of found metal by John Jackson. The whole cacophonous caboodle is a Dionysian celebration of artistic camaraderie, kitsch, texture, pattern, tactility, hilariously “bad” taste, and the beauty of it all.

While the show might seem to some to teeter close to a chaotic jumble, there is a quiet yet unmistakable undertone of cohesion – not order exactly, but a contrapuntal mesure that holds the frenzied multiplicity in relaxed harmony. Or maybe the constantly recurring disjunctive juxtapositions themselves form a pattern that becomes a kind of organizing principle. Whatever it is, artists have throughout history drawn on the non-art stuff of life to reinvigorate a tired paradigm: the names are many but topping the list, one would find Picasso, Rauschenberg, Stuart Davis, Claus Oldenburg. It’s time to add Nancy Shaver’s name to that list. While such historic shifts each time can be destabilizing and baffling at first glance, there’s no mistaking in this exhibition the exhilaration that comes with the jolt of fresh juice flowing through the veins of this untamable beast called art.